Chronic kidney disease is associated with progressive kidney fibrosis, which disrupts normal kidney function. There is a great need for treatments to reduce renal fibrosis. In this issue of the , Ito and colleagues report the development of synthetic ligands of the vitamin D receptor that target the TGF-β–SMAD signaling pathway, which is known to regulate fibrosis-associated gene expression, without inducing VDR-associated genes. These ligands ameliorated renal fibrosis in two different mouse models. This study justifies further investigation of these and related compounds for treatment of humans with chronic kidney disease or other diseases characterized by fibrosis.

DLAMs interact with the VDR and block TGF-β signaling by preventing binding to the SMAD3-binding element (SMADBE). 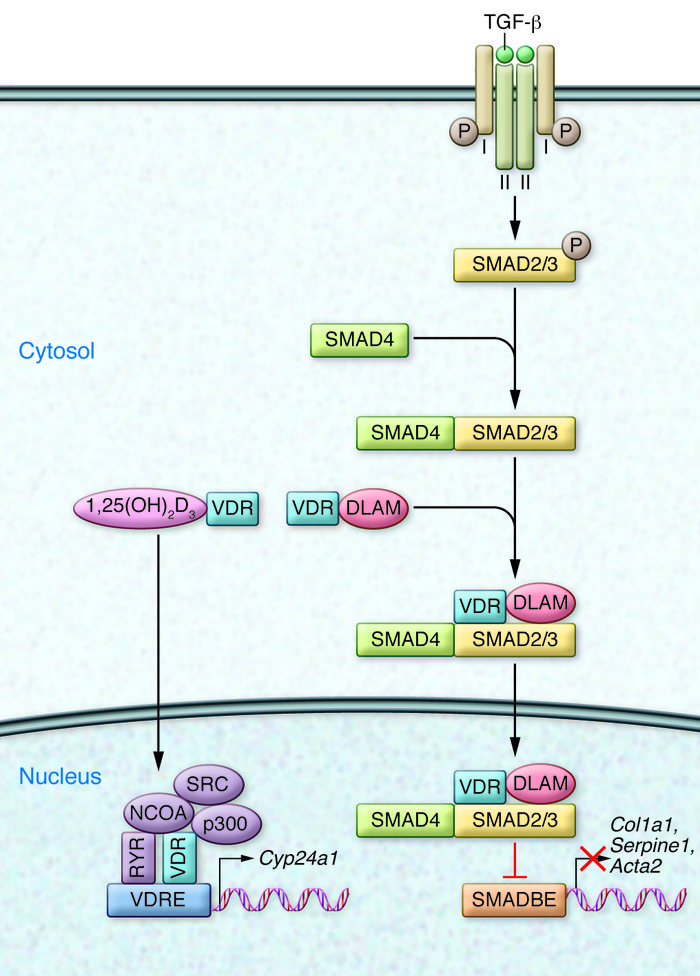 This prevention of binding prevents expression of profibrotic genes. The DLAMs do not affect classical 1,25(OH)2D3-VDR–potentiated actions on genes, such as , due to interaction with VDRE. encodes 1,25(OH)2D3-24-hydroxylase, a mitochondrial enzyme that degrades 1,25(OH)2D3 and hence plays an important role in calcium homeostasis. Normally, TGF-β signals by binding to cell surface type I and type II serine/threonine receptors, which release phosphorylated SMAD3 into the cytosol, where it interacts with SMAD4, translocates to the nucleus, binds to the SMADBE in genes, and upregulates profibrotic gene expression. NCOA, nuclear coactivators; SRC, steroid receptor coactivator.