FGF18 as a prognostic and therapeutic biomarker in ovarian cancer

FGF18 as a prognostic and therapeutic biomarker in ovarian cancer

High-throughput genomic technologies have identified biomarkers and potential therapeutic targets for ovarian cancer. Comprehensive functional validation studies of the biological and clinical implications of these biomarkers are needed to advance them toward clinical use. Amplification of chromosomal region 5q31–5q35.3 has been used to predict poor prognosis in patients with advanced stage, high-grade serous ovarian cancer. In this study, we further dissected this large amplicon and identified the overexpression of FGF18 as an independent predictive marker for poor clinical outcome in this patient population. Using cell culture and xenograft models, we show that FGF18 signaling promoted tumor progression by modulating the ovarian tumor aggressiveness and microenvironment. FGF18 controlled migration, invasion, and tumorigenicity of ovarian cancer cells through NF-κB activation, which increased the production of oncogenic cytokines and chemokines. This resulted in a tumor microenvironment characterized by enhanced angiogenesis and augmented tumor-associated macrophage infiltration and M2 polarization. Tumors from ovarian cancer patients had increased FGF18 expression levels with microvessel density and M2 macrophage infiltration, confirming our in vitro results. These findings demonstrate that FGF18 is important for a subset of ovarian cancers and may serve as a therapeutic target.

Oncogenic effects of FGF18 on ovarian cancer cells in vivo. 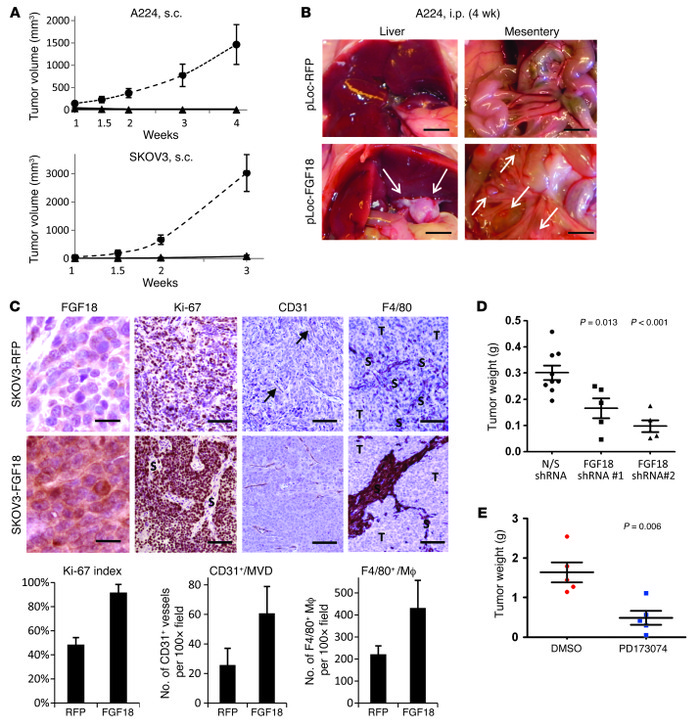