Hematopoietic stem and progenitor cell (HSPC) functions are governed by intricate signaling networks. The tyrosine kinase JAK2 plays an essential role in cytokine signaling during hematopoiesis. The adaptor protein LNK is a critical determinant of this process through its inhibitory interaction with JAK2, thereby limiting HSPC self-renewal. LNK deficiency promotes myeloproliferative neoplasm (MPN) development in mice, and LNK loss-of-function mutations are found in human MPNs, emphasizing its pivotal role in normal and malignant HSPCs. Here, we report the identification of 14-3-3 proteins as LNK binding partners. 14-3-3 interfered with the LNK-JAK2 interaction, thereby alleviating LNK inhibition of JAK2 signaling and cell proliferation. Binding of 14-3-3 required 2 previously unappreciated serine phosphorylation sites in LNK, and we found that their phosphorylation is mediated by glycogen synthase kinase 3 and PKA kinases. Mutations of these residues abrogated the interaction and augmented the growth inhibitory function of LNK. Conversely, forced 14-3-3 binding constrained LNK function. Furthermore, interaction with 14-3-3 sequestered LNK in the cytoplasm away from the plasma membrane-proximal JAK2. Importantly, bone marrow transplantation studies revealed an essential role for 14-3-3 in HSPC reconstitution that can be partially mitigated by LNK deficiency. We believe that, together, this work implicates 14-3-3 proteins as novel and positive HSPC regulators by impinging on the LNK/JAK2 pathway. 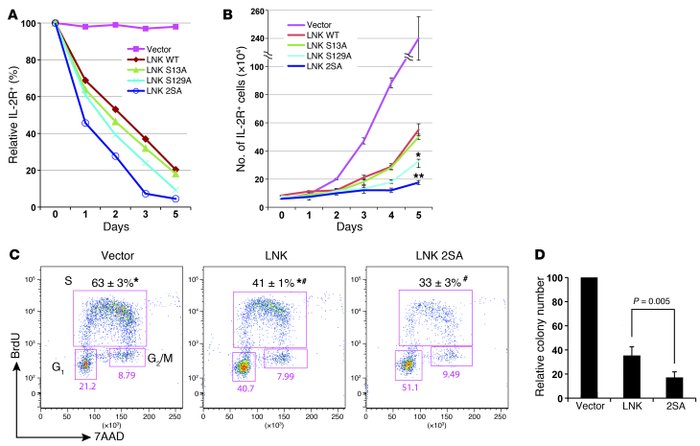 () 32D cells were infected with retroviruses encoding either WT or mutant Lnk in a bicistronic vector, pOZ, with IL-2R as a marker. We determined the proportion of infected cells as the proportion of those that expressed IL-2R 2 days after infection, and set that day as day 0. We then measured the IL-2R+ fraction every day afterward, and the percentage of IL-2R+ cells relative to the initial infection rate is plotted. Representatives of 3 independent experiments are shown. () 32D cells were infected with pOZ-Lnk, as described in . The number of cells with IL-2R+–infected populations was enumerated daily, calculated, and plotted (mean ± SD). * = 0.003, ** = 0.0001, when compared with LNK WT. () Primary Lin– BM cells from mice were infected with retroviruses encoding either vector alone or pOZ-WT or mutant Lnk and cultured in vitro in a cocktail of cytokines. BrdU was added the day after infection. Cell cycle profiles for BrdU and 7′-AAD were analyzed on IL-2R+–infected cells ( = 3). Numbers represent the percentages of BrdU+ cells in the S-phase of the cell cycle. * = 0.0003, # = 0.007. () Infected Lin– BM cells were plated in methylcellulose culture (M3434, Stem Cell Technologies), and the colony numbers are shown ( = 3). = 0.005, Lnk versus 2SA. (, , and ) Average ± SD.