Human vascular malformations cause disease as a result of changes in blood flow and vascular hemodynamic forces. Although the genetic mutations that underlie the formation of many human vascular malformations are known, the extent to which abnormal blood flow can subsequently influence the vascular genetic program and natural history is not. Loss of the SH2 domain–containing leukocyte protein of 76 kDa (SLP76) resulted in a vascular malformation that directed blood flow through mesenteric lymphatic vessels after birth in mice. Mesenteric vessels in the position of the congenital lymphatic in mature Slp76-null mice lacked lymphatic identity and expressed a marker of blood vessel identity. Genetic lineage tracing demonstrated that this change in vessel identity was the result of lymphatic endothelial cell reprogramming rather than replacement by blood endothelial cells. Exposure of lymphatic vessels to blood in the absence of significant flow did not alter vessel identity in vivo, but lymphatic endothelial cells exposed to similar levels of shear stress ex vivo rapidly lost expression of PROX1, a lymphatic fate–specifying transcription factor. These findings reveal that blood flow can convert lymphatic vessels to blood vessels, demonstrating that hemodynamic forces may reprogram endothelial and vessel identity in cardiovascular diseases associated with abnormal flow.

Fluid shear forces equivalent to those in mesenteric lymphatics drive loss of PROX1 expression in LECs. 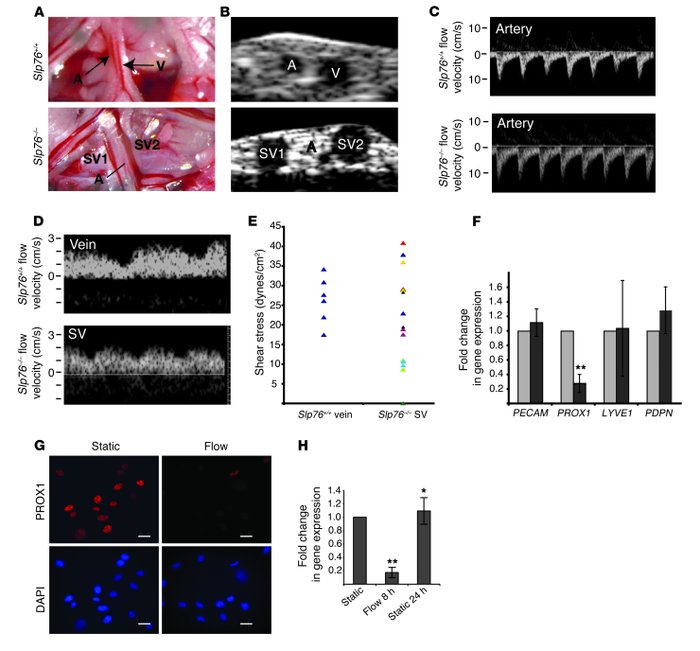 () Representative mesenteric vessels in 12-week-old and animals that were studied using Doppler ultrasound. The dilated, blood-containing vein and congenital lymphatic are denoted as SV1 and SV2. () The vessels shown in were visualized using 2D ultrasound. ( and ) The pulsed-wave Doppler signals and measured flow velocity of blood in the vessels indicated in and are shown. Note the difference in direction of flow between the arteries and veins or efferent SVs. () Calculated shear stresses for veins and SVs. data points in the same color indicate values of paired SVs from the same mesenteric bundle. () LECs exposed to flow downregulate . LECs were subjected to a shear stress of 20 dynes/cm2 for 8 hours, and the expression of the indicated mRNAs measured using qPCR. = 7. ** < 0.01. () Loss of PROX1 protein in LECs exposed to shear. Anti-PROX1 immunostaining in primary LECs is shown compared with DAPI staining of cell nuclei. () Shear-mediated downregulation of is transient in cultured endothelial cells. levels were measured after 8 hours of static culture, 8 hours of flow, or 8 hours of flow followed by 24 hours of static culture. * < 0.05, ** < 0.01. Scale bars: 25 μm.