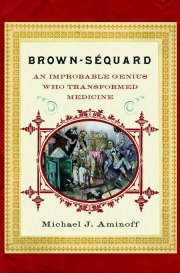 The subject of this fascinating biography was a major player in the evolution of medicine during the 19th century. Charles-Edouard Brown-Séquard is now largely known to medical students and practitioners because of the sensory and motor effects of a transverse spinal cord hemisection, known as Brown-Séquard syndrome. Born Charles-Edouard Brown, he was the son of an American merchant sea captain and his French wife, who lived on the Indian Ocean island of Mauritius. The captain was lost at sea. His disappearance left the mother and son in difficult circumstances; they had to live on her earnings as a seamstress.

Michael J. Aminoff, the author of this extensively documented history, is professor of neurology and clinical neurophysiology at the University of California, San Francisco. The book, Brown-Séquard: An Improbable Genius Who Transformed Medicine, follows up Aminoff’s shorter, more specialized 1993 biographical monograph on Brown-Séquard. The current volume adds additional historical background and illustrations, resulting in material more accessible to readers outside of medicine and physiology. Aminoff writes clearly and easily, making the book a pleasure to read.

The island of Mauritius was used as a sea-voyage stopover by Europeans in their trade with India. In 1715, the island was colonized by the French. In 1810, a few years before Brown’s birth (in 1817), the British seized the island from the French, though the English language was never adopted in everyday affairs. The French influence remains strong to this day. Thus, the young Mauritian colonial, while a British subject, had a tie to France and connected to it more firmly by adding his mother’s name to his; hence, he became Brown-Séquard. The mother and son moved to Paris to pursue his education, and he completed the baccalaureate and doctoral degrees at the Faculty of Medicine in Paris. His doctoral thesis reported experiments on sensory pathways in the spinal cord. That work reproduced the analysis of motor effects of spinal cord lesions done well over a thousand years earlier by Galen of Pergamon and added observations on the parallel sensory changes.

Aminoff paints a portrait of Brown-Séquard as a complicated individual, driven to succeed as a scientist and physician. Brown-Séquard worked enormously hard and endured both starvation and illness. His mother died while he was a student in Paris, leaving him alone, with few friends or backers. His social graces were limited. He used meager personal funds to support his research, which was imaginative and insightful. He used all available techniques to gain recognition and respect from the scientific and medical community: writing, lecturing, and demonstrating. Attracted to physiological experimentation and logic, he delved into topics other than the nervous system. During his early career, he provided evidence that the caliber of blood vessels and blood flow was controlled by the nervous system. He also concluded that chemical agents producing certain actions were carried in the bloodstream, causing effects in distant structures. This provided early evidence for the concept of hormonal action. Specifically, Brown-Séquard showed that the adrenal gland produces substances that have dramatic action on the circulation of blood. Aminoff argues that Brown-Séquard’s work on the mediation of physiological function by substances manufactured or concentrated in a tissue and distributed by the circulation, founded the field of endocrinology.

With no institutional affiliation, Brown-Séquard left France in 1854 for the United States, where his lectures brought him fame and respect, including offers of professorships at Harvard and Virginia Commonwealth Medical School. His reputation and recognition had also spread to Britain, where he participated in the founding of the famous Queen Square National Hospital for the Paralysed and Epileptic as one of the originally listed physicians. He did yeoman’s service in Mauritius during a cholera epidemic. Finally achieving recognition in France, he was chosen (in 1878) to succeed Claude Bernarnd, his sometime rival, as Professor of Medicine at the College de France.

Unfortunately, events late in his life did much to undo the extraordinary reputation and recognition that Brown-Séquard had achieved. His work on hormonal influences led him to propose that the testes contained active ingredients that could be captured by pulverizing and extracting the tissue involved. He proposed that injecting or somehow delivering the artificially obtained agent to a person or animal could restore strength and sexual activity in the aged. That idea was rejected by some biological scientists and by part of the general public. In the minds of some, Brown-Séquard’s image went from that of a brilliant savant to that of a foolish old man. At times, he was mocked in the popular press.

Aminoff’s biography of Brown-Séquard is an intriguing and entertaining read in its telling of the remarkable history of an extraordinary and troubled man, who fulfilled his widowed mother’s dreams, only to lose part of a justly won fame and influence. It documents that, in his up-and-down career, Brown-Séquard played an important part in the beginning of modern evidence-based medicine and fostered an appreciation of the value of integrative physiology in medical diagnosis and treatment.