Hepcidin is a peptide hormone that regulates iron homeostasis and acts as an antimicrobial peptide. It is expressed and secreted by a variety of cell types in response to iron loading and inflammation. Hepcidin mediates iron homeostasis by binding to the iron exporter ferroportin, inducing its internalization and degradation via activation of the protein kinase Jak2 and the subsequent phosphorylation of ferroportin. Here we have shown that hepcidin-activated Jak2 also phosphorylates the transcription factor Stat3, resulting in a transcriptional response. Hepcidin treatment of ferroportin-expressing mouse macrophages showed changes in mRNA expression levels of a wide variety of genes. The changes in transcript levels for half of these genes were a direct effect of hepcidin, as shown by cycloheximide insensitivity, and dependent on the presence of Stat3. Hepcidin-mediated transcriptional changes modulated LPS-induced transcription in both cultured macrophages and in vivo mouse models, as demonstrated by suppression of IL-6 and TNF-α transcript and secreted protein. Hepcidin-mediated transcription in mice also suppressed toxicity and morbidity due to single doses of LPS, poly(I:C), and turpentine, which is used to model chronic inflammatory disease. Most notably, we demonstrated that hepcidin pretreatment protected mice from a lethal dose of LPS and that hepcidin-knockout mice could be rescued from LPS toxicity by injection of hepcidin. The results of our study suggest a new function for hepcidin in modulating acute inflammatory responses.

Effect of a high-iron diet on LPS-injected wild-type and mice. 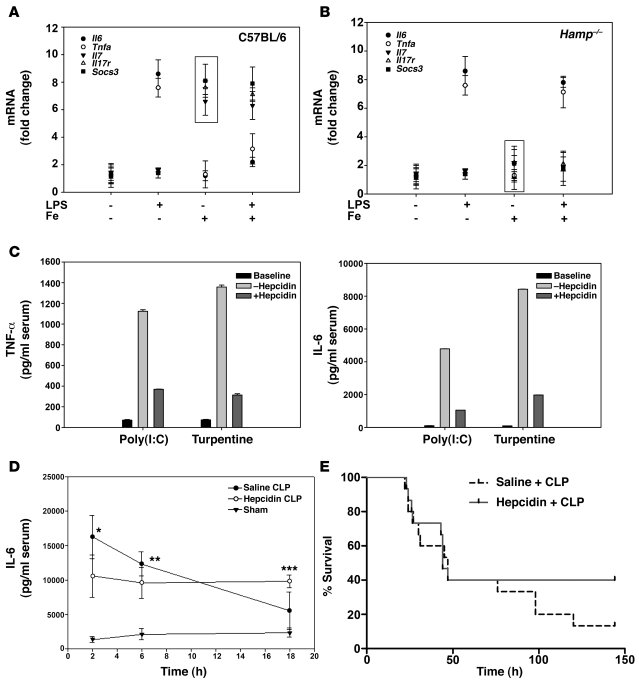 () Six C57BL/6 and () 6 mice maintained on a high-iron diet for 2 days were given an intraperitoneal injection of PBS or LPS (1 mg/kg). After 4 hours mice were sacrificed, and mRNA was extracted from liver and spleen. Liver mRNAs for , , , , and were analyzed by RT-PCR. () Five C57BL/6 mice were treated with an intraperitoneal injection of PBS or hepcidin (100 μg/mouse). Two hours after hepcidin/PBS injection, mice were given an intraperitoneal injection of PBS, poly(I:C) (100 μg/mouse), or turpentine (100 μl/mouse). After 4 hours mice were sacrificed, sera isolated, and TNF-α and IL-6 (pg/ml serum) levels were measured. () Fifteen C57BL/6 mice were subjected to CLP and treated with hepcidin or saline, and IL-6 levels (pg/ml serum) were assayed. * = 0.039, ** = 0.068, *** = 0.015. () Survival of the mice treated in was determined. The survival data were plotted as a Kaplan-Meier plot.