In acute inflammation, infiltrating polymorphonuclear leukocytes (also known as PMNs) release preformed granule proteins having multitudinous effects on the surrounding environment. Here we present what we believe to be a novel role for PMN-derived proteins in bacterial phagocytosis by both human and murine macrophages. Exposure of macrophages to PMN secretion markedly enhanced phagocytosis of IgG-opsonized Staphylococcus aureus both in vitro and in murine models in vivo. PMN secretion activated macrophages, resulting in upregulation of the Fcγ receptors CD32 and CD64, which then mediated the enhanced phagocytosis of IgG-opsonized bacteria. The phagocytosis-stimulating activity within the PMN secretion was found to be due to proteins released from PMN primary granules; thorough investigation revealed heparin-binding protein (HBP) and human neutrophil peptides 1–3 (HNP1–3) as the mediators of the macrophage response to PMN secretion. The use of blocking antibodies and knockout mice revealed that HBP acts via β2 integrins, but the receptor for HNP1–3 remained unclear. Mechanistically, HBP and HNP1–3 triggered macrophage release of TNF-α and IFN-γ, which acted in an autocrine loop to enhance expression of CD32 and CD64 and thereby enhance phagocytosis. Thus, we attribute what may be a novel role for PMN granule proteins in regulating the immune response to bacterial infections.

Identification of HBP and HNP1–3 as enhancers of bacterial phagocytosis in macrophages. 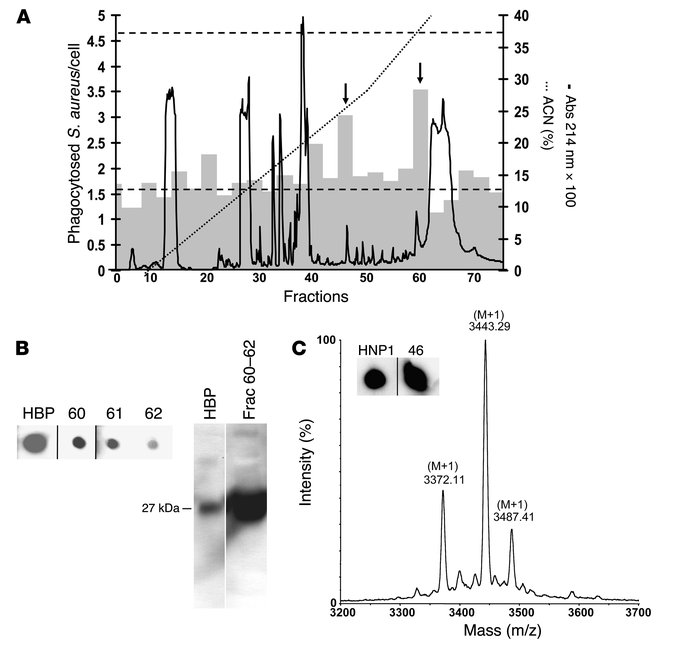 () Fractionation of PMN by reversed-phase HPLC. PMN was loaded onto a C18 column. Proteins (right axis, solid curve) were eluted with a gradient of ACN with 0.1% TFA (right axis, dotted line). Gray bars indicate the phagocytic activity resulting from stimulation with material of 3 consecutive fractions (left axis). Basal phagocytosis and phagocytosis in response to PMN are indicated by the lower and upper dashed line, respectively. Arrows indicate active fractions (45–47 and 60–62). For each analysis, 4 independent experiments were performed. () Immunological detection of HBP in fraction 60–62 using dot blot (left panel). These fractions were pooled and further analyzed with Western blot analysis (right panel). As positive control for both Western and dot blot, 40 ng recombinant HBP was used. () HPLC fractions were screened for the presence of HNP1–3 by dot blot analysis. Positive staining was detected in fractions 46 (insert). Inserts of dot blots in and were run on the same gel but were noncontiguous. As positive control 20 ng HNP1 was used. Determination of the mass values of material in fraction 46 with MALDI-MS gave molecular weights close to the theoretical values of HNP1–3.