Overconsumption of lipid-rich diets, in conjunction with physical inactivity, disables and kills staggering numbers of people worldwide. Recent advances in our molecular understanding of cholesterol and triglyceride transport from the small intestine to the rest of the body provide a detailed picture of the fed/fasted and active/sedentary states. Key surprises include the unexpected nature of many pivotal molecular mediators, as well as their dysregulation — but possible reversibility — in obesity, diabetes, inactivity, and related conditions. These mechanistic insights provide new opportunities to correct dyslipoproteinemia, accelerated atherosclerosis, insulin resistance, and other deadly sequelae of overnutrition and underexertion.

Processing of dietary lipid by the enterocyte: absorption, selection, packaging, and secretion. 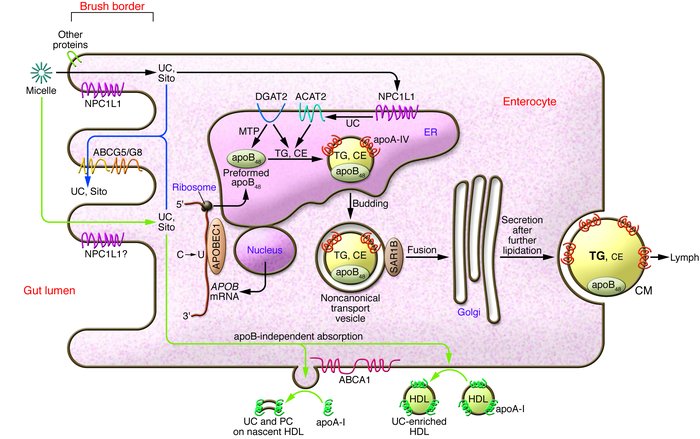 In the apoB-dependent pathway (black arrows), apoB48 becomes assembled in the ER with initially small amounts of triglycerides that are synthesized mainly by DGAT2 and transferred via MTP. UC imported from the gut lumen into the enterocyte via NPC1L1 and possibly other proteins becomes esterified by ACAT2 and also packaged into the newly forming apoB48 lipoprotein. Continued lipidation in the ER inflates the particle, requiring stabilization of its surface by phospholipids and apoA-IV. The nascent particles are then transferred to the Golgi apparatus in noncanonical transport vesicles, further lipidated, and finally secreted as CMs into lymph. Some of the absorbed cholesterol and essentially all of the dietary noncholesterol sterols are pumped out of the enterocyte, back into the intestinal lumen for elimination from the body (blue arrows). In the apoB-independent pathway (green arrows), UC is absorbed into the enterocyte, and then ABCA1 facilitates its efflux from the plasma membrane onto extracellular apoA-I molecules. Movement onto preexisting extracellular HDL also occurs. The apoA-I originates both from local intestinal synthesis and from plasma. Absorption of NEFAs, monoglycerides, and lipid micronutrients across the brush border and esterification by acyl-CoA:monoacylglycerol acyltransferase enzymes are not shown here. CE, cholesteryl ester; PC, phosphatidylcholine; Sito, sitosterol and other noncholesterol sterols.