Protein kinase cascades in the regulation of cardiac hypertrophy

Protein kinase cascades in the regulation of cardiac hypertrophy

In broad terms, there are 3 types of cardiac hypertrophy: normal growth, growth induced by physical conditioning (i.e., physiologic hypertrophy), and growth induced by pathologic stimuli. Recent evidence suggests that normal and exercise-induced cardiac growth are regulated in large part by the growth hormone/IGF axis via signaling through the PI3K/Akt pathway. In contrast, pathological or reactive cardiac growth is triggered by autocrine and paracrine neurohormonal factors released during biomechanical stress that signal through the Gq/phospholipase C pathway, leading to an increase in cytosolic calcium and activation of PKC. Here we review recent developments in the area of these cardiotrophic kinases, highlighting the utility of animal models that are helping to identify molecular targets in the human condition. 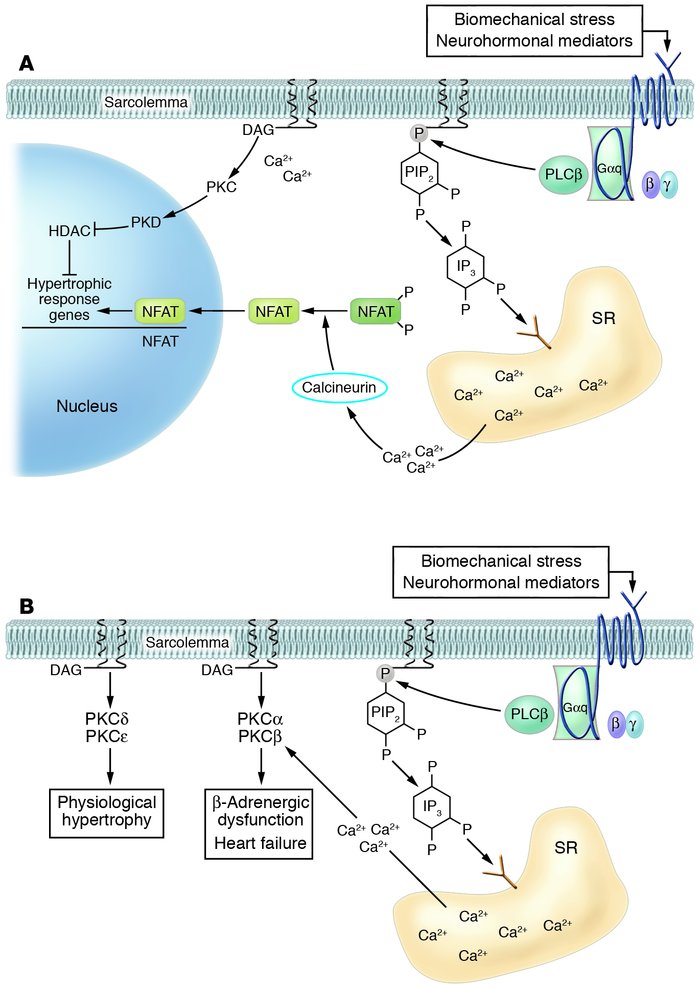 Gq/11-activated pathways in maladaptive hypertrophy. () Calcineurin/NFAT pathway. Hypertrophic stimuli, acting via the α subunit of Gq or G11, recruit PLCβ to the membrane, where it hydrolyses phosphatidylinositol 4,5 bisphosphate (PIP2), releasing inositol 1,4,5-triphosphate (IP3) and diacylglycerol (DAG). IP3 binds to receptors in the sarcoplasmic reticulum (SR), releasing calcium. The increase in cytosolic [Ca2+], together with calmodulin, activates the protein phosphatase calcineurin. Calcineurin dephosphorylates several residues in the amino-terminal region of the transcription factor NFAT, allowing it to translocate to the nucleus and activate transcription of hypertrophic response genes. () PKCs. Activation of PKC isoforms is accomplished by the IP3-mediated release of calcium from the SR together with DAG (classical isoforms), whereas the so-called novel isoforms are activated by DAG alone. See text for details of the roles of the various PKC isoforms in hypertrophy. One PKC-regulated pathway not discussed is that leading to the inhibition of a subset of histone deacetylases (HDACs 5 and 9) that appear to specifically regulate cellular hypertrophy. In this pathway, one or more PKC isoforms activate another protein kinase, PKD, that then phosphorylates the HDAC, leading to its export from the nucleus and, thus, inactivation. This pathway is the subject of a review in this series ().