Alzheimer disease therapy: Can the amyloid cascade be halted?

Alzheimer disease therapy: Can the amyloid cascade be halted? 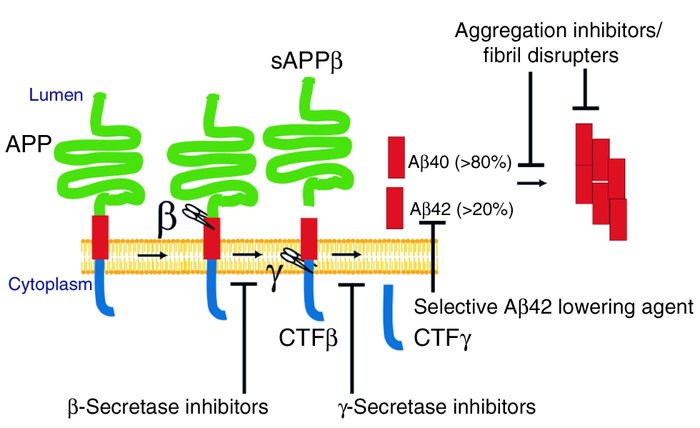 Aβ generation, aggregation, and sites for therapeutic intervention. APP is a type I transmembrane protein that is processed in several different pathways. The Aβ generation pathway is shown. Generation of Aβ in the β-secretase pathway requires two proteolytic events, a proteolytic cleavage at the amino-terminus of the Aβ sequence, referred to as β-secretase cleavage, and a cleavage at the carboxy-terminus, known as γ-secretase cleavage, which results in another carboxy-terminal fragment (CTFγ). Although many Aβ peptides of various lengths can be produced in this fashion, the two of most interest are Aβ40, which is the predominant Aβ peptide, and Aβ42, which is typically produced at much lower levels than Aβ40. Although both peptides can aggregate, Aβ42 is thought to aggregate much more rapidly and to seed the aggregation of Aβ40. Sites for anti-Aβ intervention are indicated. Scissors indicate proteolytic cleavages. “sAPPβ” refers to the large secreted derivative generated by β-secretase cleavage of APP.